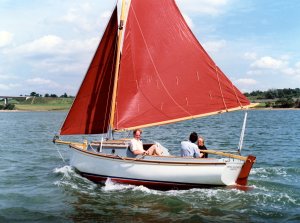 The Norfolk Boatyard range of traditionally styled sailing boats was developed originally by Charlie Ward but is now handled by Neil Thompson Boats who have worked closely with Charlie for a number of years. My first commission from Charlie was the popular Norfolk Gypsy and she was later followed by the 13ft Urchin, the 25ft Smuggler, and in 2000 the steel sailing barge ‘Juno’.

The 45ft “Juno” is an East Coast barge yacht aesthetically based closely on the Thames barge. This wonderful vessel is currently used by Charlie for charter work on the North Norfolk coast and is admired by all who see her.

I have recently assisted Neil with the development of the Norfolk Explorer, a motor launch version of the John Leather designed Norfolk Oyster.